The Art and Animation of Rival Peak

A unique, live, interactive entertainment experience deserves a unique visual aesthetic, and that’s what we set out to create for Rival Peak. From a visual standpoint, Rival Peak is part interactive cartoon, part reality TV series, and all different.

In my thirty years working in digital art and video games, I’ve never worked on a project like this one. Rival Peak is the first of a new genre of consumer entertainment – a Massive Interactive Live Event, or MILE, that casts Facebook users as quasi-gods observing and influencing the status, actions, relationships and overall storylines of a dozen distinct, AI-driven characters marooned on a desert island in a reality television-esque format.

As an entirely cloud-based experience – living in the cloud, processed in the cloud, and served from the cloud in the form of an interactive livestream overlay – Rival Peak needed to strike a balance between visually enthralling and lightweight and versatile.

With senior team members Matt Rowton and Tim Tao, we were determined to create a style that was more than just pleasing to the eye. It needed to be iconic, approachable, and tell a very visual story with enough impact to keep the audience wanting more. With relatively little spoken dialogue between Rival Peak’s AI-driven characters, much of their personalities and nearly all of their in-the-moment behavior and reactions is conveyed through their appearance and animations. With colorful hairstyles, outfits, and accessories, and individual, idiosyncratic movements and responses to stimuli of all kinds, Jeb, Inola, Nosh, Winter and the other eight AI inhabitants of Rival Peak are as deep and distinctive in terms of appearance as they are in personality.

When we first discussed this project, it was clear that the experience would be quite mysterious for viewers, especially at the beginning, so we were concerned that a realistic art style might make the dark aspects of the story even darker and too daunting for some portion of the audience. On the other hand, going too far in the “cartoon-y” direction might make Rival Peak feel like a “casual game” experience, and it’s certainly not that. By using a whimsical, Pixar-esque art style with a claymation feel, no matter what’s going on story-wise, even dark subject matter would be better received. It also helps convey the individual personalities through the use of exaggerated expressions and physical reactions. Additionally, if we really want the audience focused on a particular object or occurrence, we can emphasize that visually to help draw attention.

To help deliver as much information as possible without extensive dialogue, the characters in Rival Peak were designed in Maya with a tubular, claymation look. Each character has a somewhat soft, clay-like appearance, which can bend and stretch to suit the circumstances but never looks sharp or pinched. 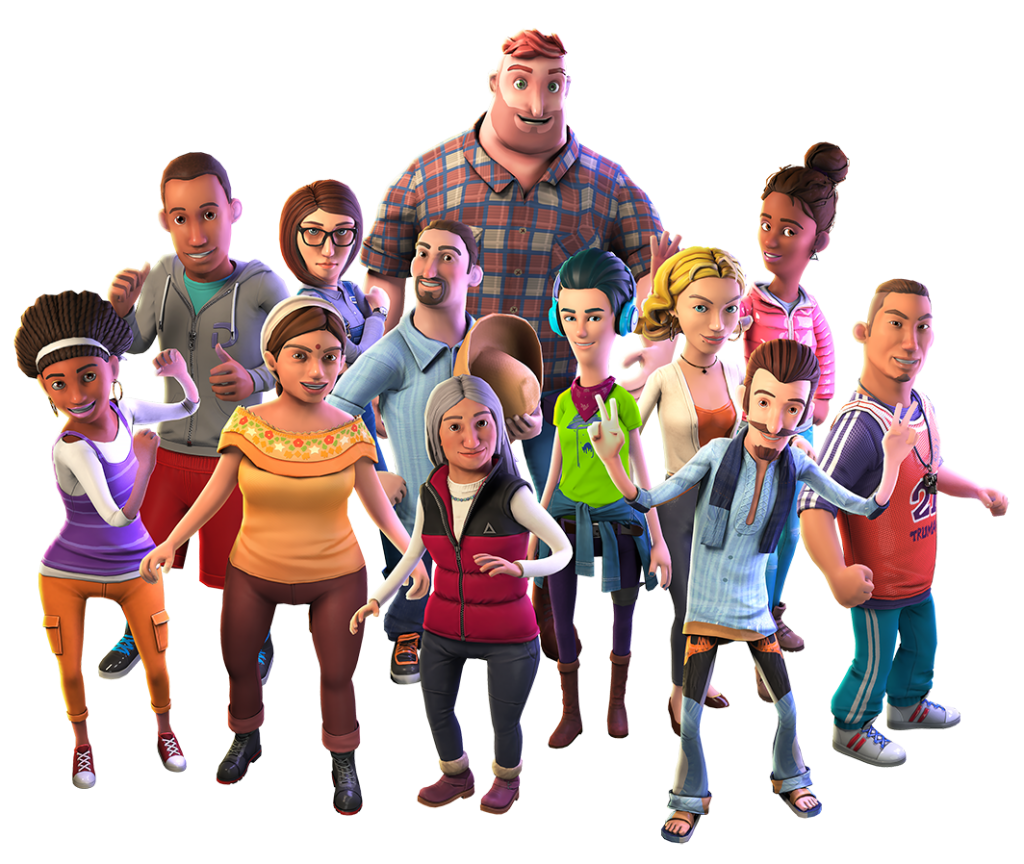 The same philosophy pervades each characters’ animations. From movements to expressions, we gave all of the Rival Peak inhabitants their own unique styles, while also including universal actions that are shared by all twelve characters to help establish a sort of visual vocabulary that viewers will quickly understand. In all, there hundreds of different actions, expressions, motion and locomotion types that can be combined to create many thousands of different animation sequences for any situation that arises.

Built in Unity, Rival Peak uses standard “humanoid” rigging to help share animations across characters, with Maya animation data configured in different ways and then stored in each character’s respective avatar asset to accommodate the range of body shapes and sizes. Maya enables us to save subtle variations in things like posture and gait as separate layers. We also slightly edited base layer animation timing and values for each character, to give them each their own distinct way of performing a given action, like sneezing or bowing, without having to build each animation entirely from scratch.

My schooling was in film and classical animation, and everything in Rival Peak is hand-animated — no motion capture. A big reason for this is that we get exaggerated motion, where mocap gives you very realistic motion. Each of the twelve characters has their own unique set of key animations — even shared movements like locomotion are tweaked on a case-by-case basis, so no two characters walk, jump, run, etc. in quite the same way as the other characters. Important animations that convey state of mind are entirely unique to each character. 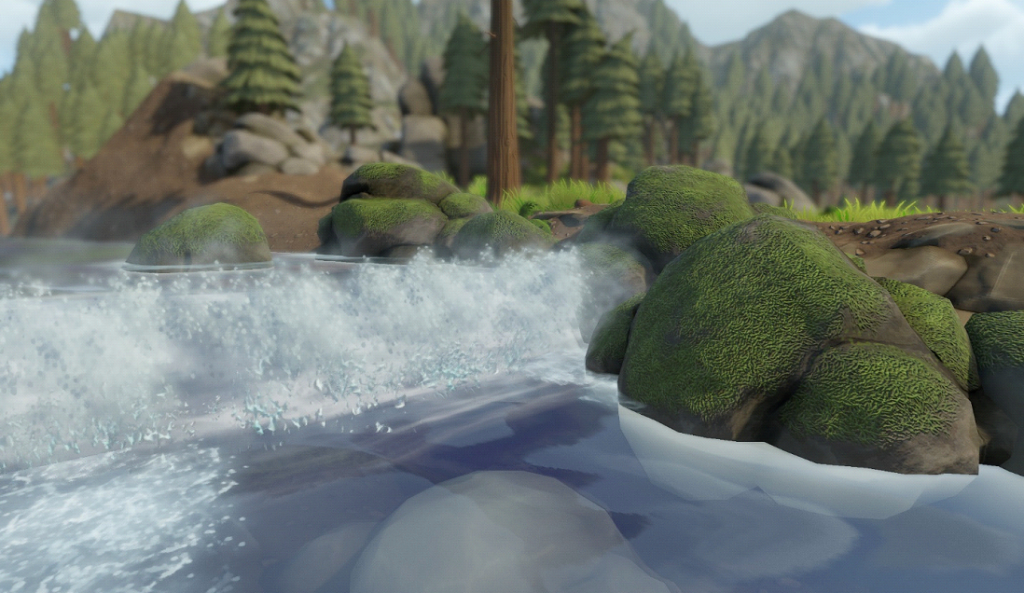 Rival Peak is set in the Pacific Northwest, with the twelve AI  characters fending for themselves in a forested area at the base of fictional Mount Pneuma, with lush vegetation and varied terrain. Utilizing Unity’s terrain system and Complete Terrain Shader plug-in, we used multiple terrain objects so that each sub-area of the environment sports a different texture set – providing tremendous variety while optimizing performance. Using Polybrush, the team applied vertex-blended textures on non-terrain meshes such as roads and paths.

This isn’t a bunch of pre-rendered footage, this is all AI-driven animation that reacts to all sorts of factors, from sudden changing of characters’ priorities to the input of the audience, and even real-world physics. So the reactions of characters and the flora and fauna of the area are realistic in terms of spontaneity and fluidity of movement even though everything has a rather whimsical look and feel.

Given the Pacific Northwest location, we wanted to create environments with high levels of visual fidelity, to give viewers something new to see and explore even when they tune in multiple times each day. We drew inspiration from many sources, including Plants vs. Zombies: Battle for Neighborville for the style of conifer trees and rock textures we wanted: lush and substantial-looking yet with a patina of fairy tale aesthetic to it all.

For ground textures, we used zBrush and/or Substance Designer to create colorful, exaggerated leaf, stone, and stick forms for use in extreme yet noiseless heightmap images. In turn, the heightmaps enabled the Complete Terrain Shader to create variety in the terrain surface through interesting texture blends. We then painted detail meshes on the ground – primarily grass and short vegetation, with the occasional small stick or rock. The detail meshes cull at a certain camera distance, so we were careful to paint them over matching ground textures, particularly in the case of plant details. 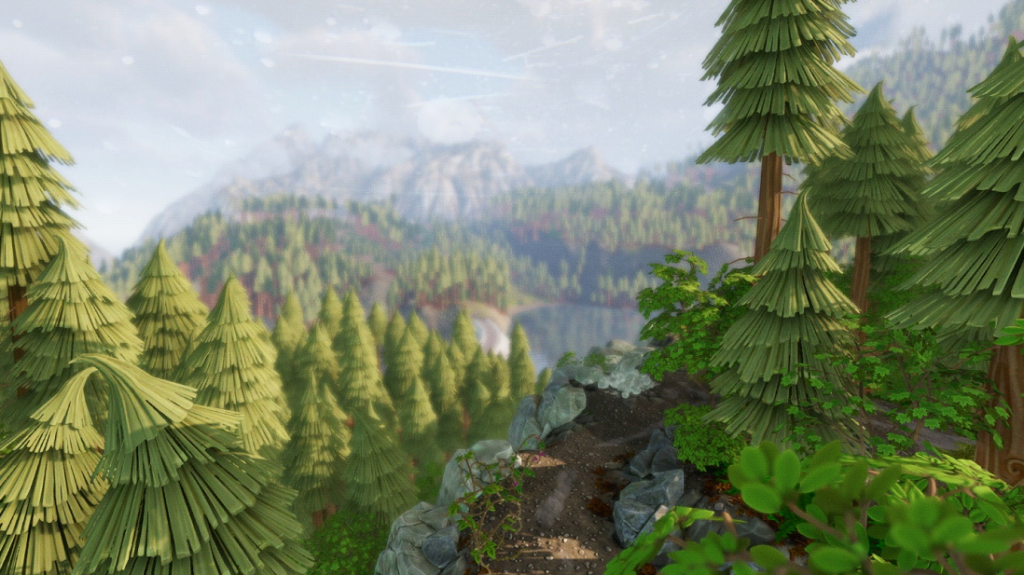 Because Rival Peak is essentially an interactive reality television experience, the art team applied similar sensibilities to creating layers of foreground, midground, and background for viewers to see and explore – while constantly being sensitive to the bandwidth and computing demands required to serve a nearly limitless number of viewers at any given moment.

Layers of medium-sized prop decorations such as larger shrubs, rocks, tree stumps and fallen branches, followed by trees and large props such as cliffs and buildings, help add depth, lushness and variety to the relatively confined area around Mount Pneuma. We wanted to create the feeling of an expansive world with all sorts of areas and objects to explore. Maintaining a high degree of visual complexity with modest bandwidth demands was challenging but ultimately really satisfying.

We’re developing the art and animation of Rival Peak with the expectation that as the show progresses across episodes and seasons, so will the characters’ animations. A good analogy would be The Simpsons: when that cast of characters first appeared on The Tracy Ullman Show, the range of animations for each character was fairly limited, but they evolved considerably over the years.
Building the world and inhabitants for an interactive, cartoonish reality series was a novel experience. We think we’ve combined the best of several visual styles to create something memorable that viewers will enjoy visiting, exploring, and influencing again and again.