The APEs of Rival Peak

As the first Massive Interactive Live Event, or MILE, Rival Peak is a unique opportunity for viewers of a quasi-reality TV show to participate directly in the action as it unfolds. Both collectively and individually, audience members can influence numerous aspects of Rival Peak in ways both big and small. From affecting the weather to accelerating tasks and choosing goals, viewers drive the plots and subplots in real-time as they’re experiencing the show. Those instances of audience influence are called Audience Participation Events, or APEs.

With APEs, viewers’ input takes the form of clicks, called “taps” – in effect “tapping on the glass” of the terrarium that is Rival Peak – to assist the AI characters while also earning points for both the viewer and the character(s) being helped. The audience involvement with, and impact on, the live show are made possible using the Genvid Technologies interactive livestreaming technology, as detailed here.

There are three types of APEs in Rival Peak: Project, Action, and Goal:

Project APEs: these APEs involve environmental hazards, puzzles, or obstacles that are either resolved or advanced once per day. Typically, these are region/area-specific and involve a visible state change over time. Project APEs can range from smaller things like clearing debris or setting up tents to more elaborate and advanced tasks such as building a bonfire or building a bridge. In any case, viewers can choose to help by clicking on characters and/or items involved in the project at hand.

Using the bonfire example, the twelve AI inhabitants of Rival Peak have the goal of building a large fire before the end of a daily session (8-hour live daily broadcast) to cap off the night. Viewers can send “taps,” to reward participating characters.

Action APEs: Action APEs are similar to Project APEs, but on a smaller, more personalized scale; another key difference is that Action APEs can be accelerated by viewers’ taps. While Project APEs involve multiple – often, all – of the characters’ participation, Action APEs are specific to a single resident of Rival Peak. Action APEs include things like reading a book, picking fruit, or studying a complex object such as a statue, and can be accelerated by viewers by as much as 100%. Because they involve a single AI character, they involve less viewers (not all viewers will be following a single character at any given time), but typically require less taps proportionately.

The Action APE event diagram below shows how viewers’ “taps” accelerate the action: while the Action is in progress, the Authority — the main “brain” of Truman and the final arbiter of all actions/reactions/consequences — accumulates the Score from viewer activity and reports that increase in Score via the APE Game Data. The Viewer Client receives the Action Completed notification at the end of the allotted time, stops accepting viewer input, and reports the final score to both the Simulation and the Viewer Data Service. The final score is applied to the character’s persistent, cumulative score and the Action is completed in a fraction of the normally required time. 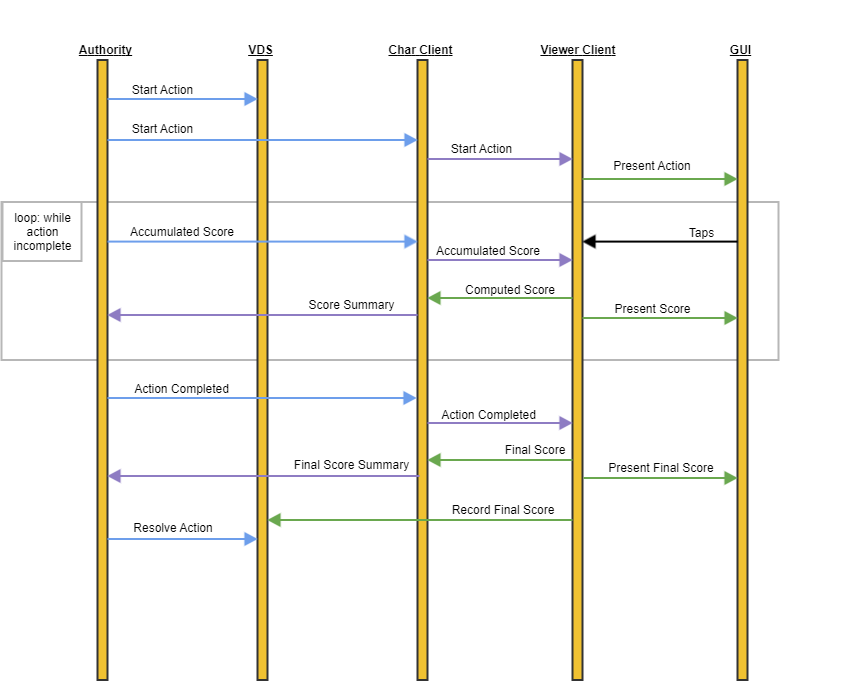 Goal APEs: A Goal APE is an instance in which audience members following a particular AI character can vote on which goal that character should pursue next. Each of the twelve characters in Rival Peak have their own livestream channels, with audience members able to follow any of them and jump from one to another. Every so often (every x minutes, on average), a character stands still, assumes a thoughtful pose, and a widget appears on screen. Viewers following that character’s stream then have a minute or two to choose among three goals: two that are among that character’s current objectives and an additional, randomly-selected goal. Viewers can cast one vote per APE, with a score bonus given for a vote cast for the winning (majority) goal.

APEs are at the very heart of Rival Peak, enabling the audience to not only help or hinder the show’s characters, but to guide them and become invested in them, both singly and as a group. We expect to tweak and modify — and perhaps add to — the initial APEs as the season progresses, based on viewer behavior and feedback.